I’d seen the trailer of the Waitomo Trail Run earlier in the year and decided if there were any events to head north for this would be one. So (easily) convincing Scott to join me, we booked tickets to Auckland for a long weekend to explore the caves of Waitomo.

Like every event these days, it rolled around far too fast, and my training was somewhat dubious. Or maybe it wasn’t. It’s fair to say the last year of consistent training has set me up with a pretty solid base, which I occasionally take for granted. When I thought back over the previous week, I had managed to fit in a mountain bike, a road bike, a kayak, a trail run and three yoga sessions (it’s my new morning ritual, will be interesting to see how long it lasts!). So why I hadn’t trained specifically for this race, there was plenty of cross training in there to keep the heart ticking over. 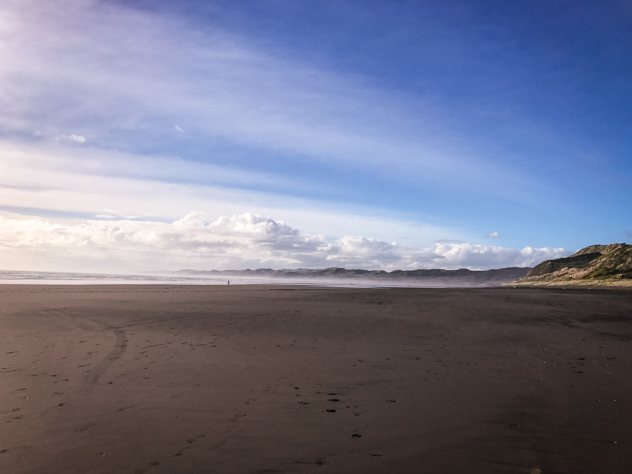 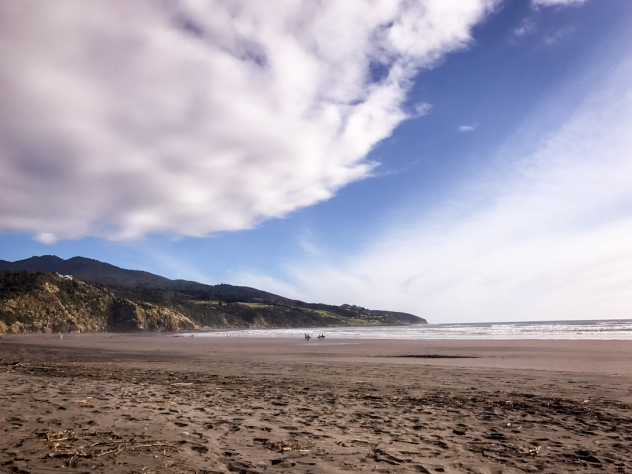 Meeting Scott in Auckland on Friday morning, we picked up our rental car and hit the motorway south. With plenty of time to kill before registration in Waitomo at 5pm, we decided to take a detour and see what Raglan was all about. Discovering a quirky little surfing town, we grabbed some lunch and spent a very peaceful afternoon on the beach soaking up the autumn rays and watching many attempt to catch the decent-sized waves rolling in.

Punching in Waitomo to the navigation, we opted for the shortest route, resulting in a gravel road and some very beautiful North Island countryside. Hey, it’s, all part of the adventure.

The Waitomo Trail Run, now in its second year, is put on by Paul Charteris, well-known in the trail run world for running the Tarawera Ultra. It had managed to attract 3,300 people, a massive number for a New Zealand event. There were four options – 35km, 22km, 11km and 6km. So no surprise, we both entered the 35-kilometre event – may as well get our money’s worth!

Staying with a great friend’s parents, who live a very handy ten minutes out of Waitomo, we planned to head to registration about 5:30pm then on to their house. What we didn’t count on was 3,300 others turning up at the same time!! After seeing the length of the line, and what we imagined would be at least an hour wait, we headed back to the Roberts with the plan to come back just before registration closed at 8pm. Definitely a great idea – we turned up with no line and were registered in less than five minutes! 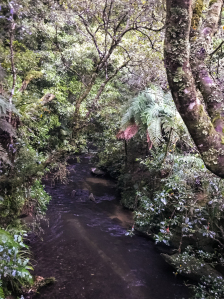 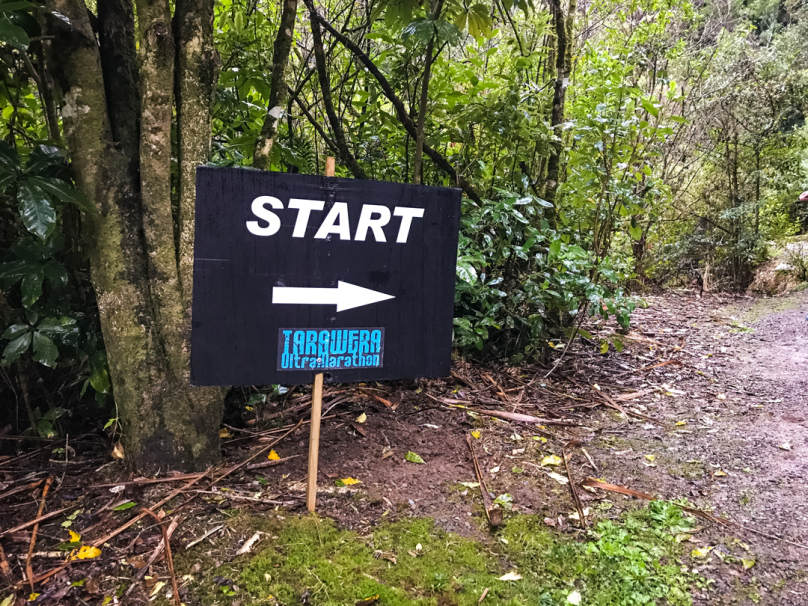 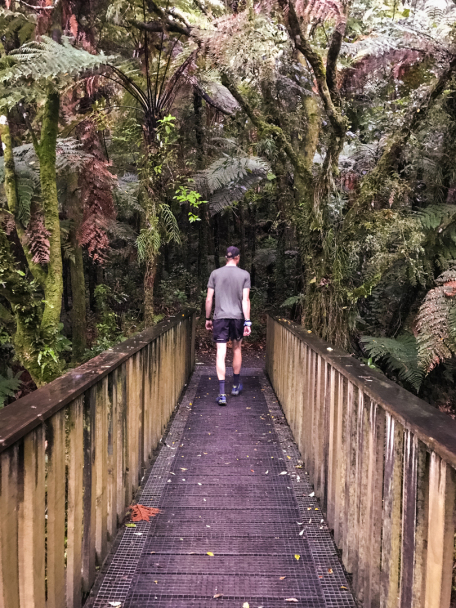 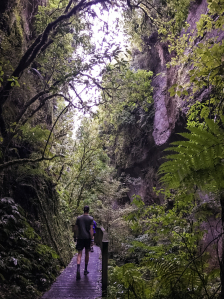 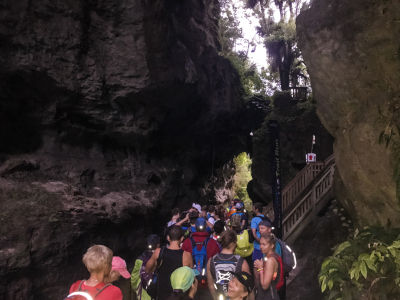 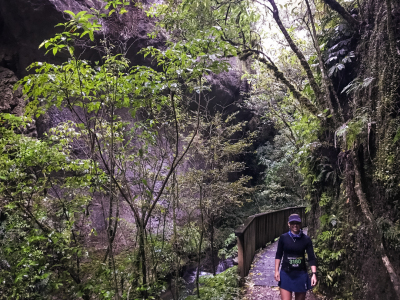 An early start had us parking the car and getting on the bus while it was still dark. Heading south for a good 30 minutes had me questioning just how underprepared I was for this race. Opting to not take a pack with water (there were aid stations along the way) we looked around and couldn’t spot anyone who had made the same decision as us. Too late now but it certainly didn’t help the nerves! We were on the second bus to arrive at the start, which meant we were also in the second wave to start. We were at the Mangapohue Natural Bridge, and a quick five-minute walk amongst beautiful native bush, deep in the undergrowth had me excited as to how the day would unfold. I was feeling good; drizzling and warm, it was ideal conditions for running.

The gun went off just after 7.30am. Playing follow the leader, we climbed some stairs and headed off on the course. It’s not often the start of the race is memorable, but as I arrived at a fence with the competitors in front of me coming back looking lost, I could only laugh. No one had any idea where the track was. Some were saying that it took us back to the carpark where the bus dropped us off, with others saying that it had to be the track and maybe we went past it? So off we all went again, back to the start. The front runners arrived and were told to turn around and head back; we had missed a marker right at the very start which took us in an entirely different direction. Eventually, we found it and got back on track, but by now we were all a big group again and had lost at least five minutes of time. 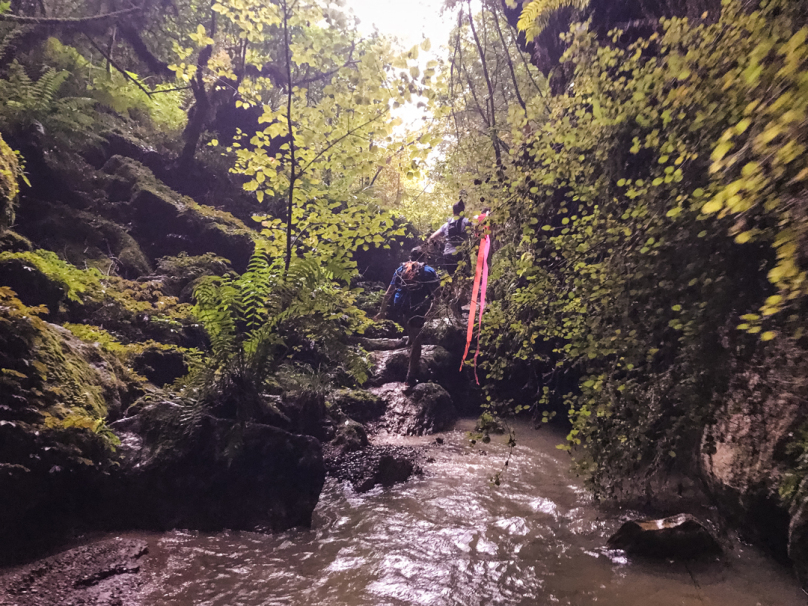 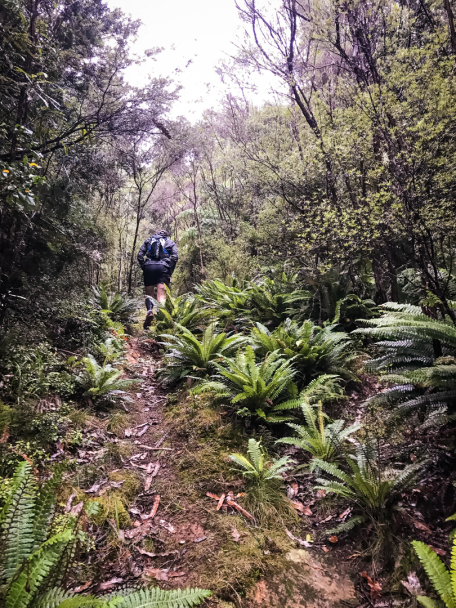 I managed to get into a steady rhythm as best I could – it was extremely wet underfoot which made for lots of sliding! It was exactly like the jungle – except you could reach out and grab branches without your hand being covered in biting ants! Gotta love NZ. The terrain was beautiful; dense bush, river crossings and lots of single track. We also went through the only cave of the day, a highlight of the course. I had planned on taking pictures with my iPhone for the entire course, but after face-planting in the cave while trying to take a photo and still run, I decided that a broken phone wasn’t what I wanted, so it was put away and only pulled out a few times when I was walking.

The first aid station was 10 kilometres in and I arrived feeling great. The race had opted for a ‘no cup’ policy, so I was carrying my Altra Aspire cup in a belt around my waist, along with my phone. The aid stations were second to none – water, electrolytes, fruit, sandwiches, coke and sweets – everything needed to keep you going. Grabbing a drink and a few bananas I didn’t wait around long and was back on the trail in no time. 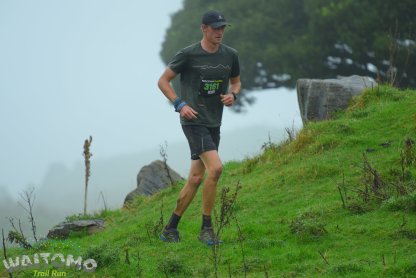 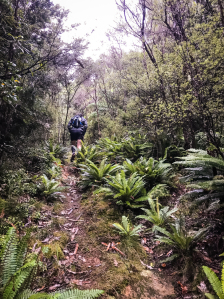 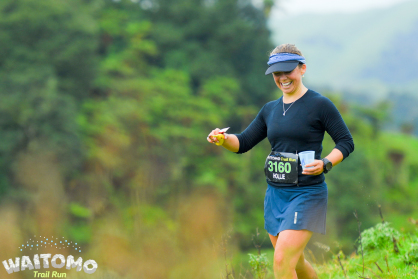 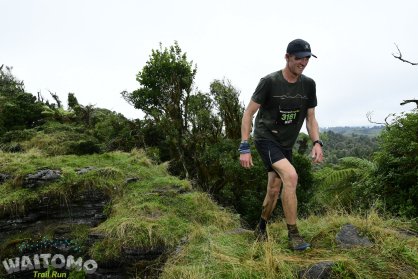 The next eight-and-a-half kilometres were the toughest of the day. Mostly through farmland, it was quite steep in places, both up and down, and the wet underfoot made it very slow going. I took many tumbles and ungraceful slides, and at times carried an extra few kilogrammes of mud under my sneakers, but it was bloody good fun. Run the flats and downs and walk the ups was the motto of the day, which seemed to work out very well for me. I even ran some of the ups!

I had no idea how far away the next aid station was, and after what seemed like ages I was questioning whether not taking a pack was a bad move. I was just lucky that it wasn’t any warmer – if I come back to do this race again I will definitely be taking a pack with me! But finally, the aid station came into view, where I guzzled down some much-needed water and sweet oranges, before grabbing a few more goodies and eating while I walked. 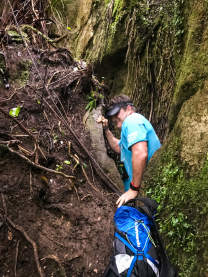 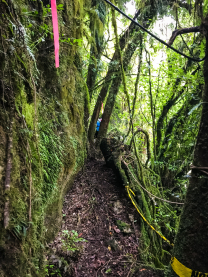 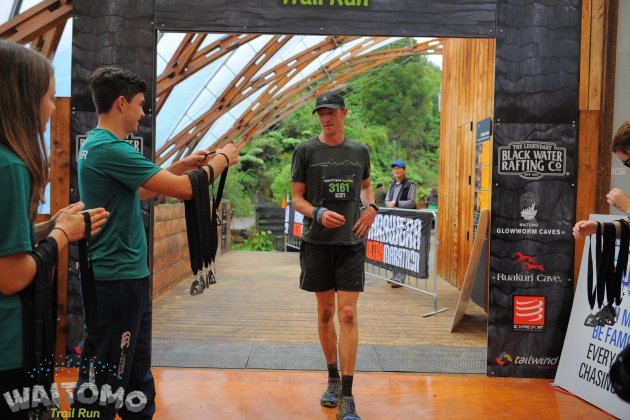 A few kilometres after the second aid station we got to a section where we could opt to go through the hole in the rock – or bypass it. When in Rome! I was with three other competitors, so we all decided to head for the gap. Helping each other through – well I was fine, one of the few times being small is an advantage! From then on the landscape opened out and was mostly downhill as we headed for the finish line at the Glowworm Caves Visitor Centre. Unfortunately, the last four or so kilometres was on the same track as the 6km race, which meant many people and plenty of children dodging. It was a shame really, as it slowed the pace and there were just too many people going in both directions and was too narrow to pass easily. 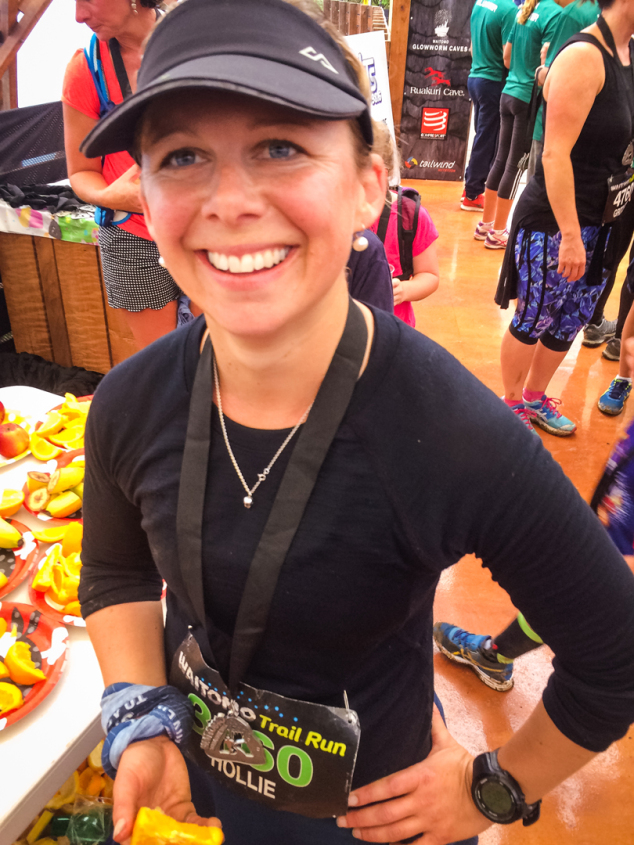 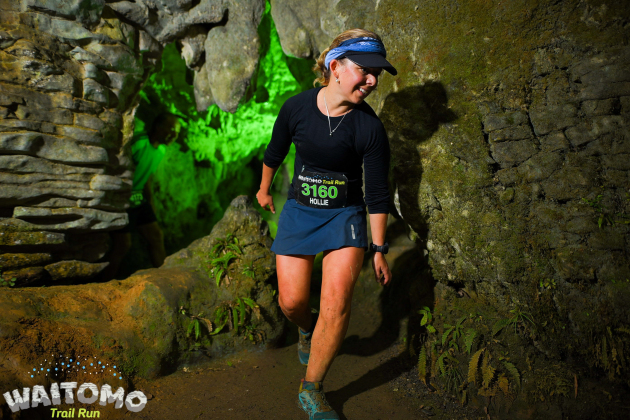 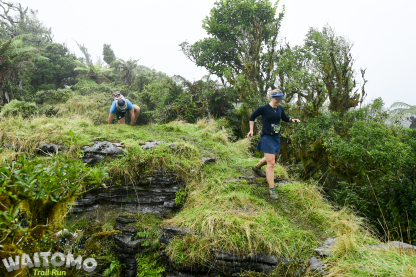 But it did mean that the end wasn’t far away and I managed to cross the finish line in 5.02 hours, just sneaking into the top 10 females. Scott was waiting for me having come in an amazing hour beforehand, and finishing 12th overall. I wonder how he would have gone if we didn’t get lost at the start??

I’m a South Islander through and through, but this course gives the trails of the South a run for their money. While it doesn’t have the Southern Alps to frame the backdrop, I can only imagine what it would be like on a beautiful day. If you want to do a run in the North Island, then I can’t recommend this one highly enough.

The Boys from Bondi Beach

Running with the Desert Gods