There are events out there which are run as a business with the aim to make a profit. Then there are events which are put on purely to provide an opportunity for people to explore our amazing country and push their adventure limits. While I have no issue with the first (we all have to make a living somehow), the South Canterbury Adventure Race 12-hour Rogaine falls into the second category. To be honest, it’s one of the best. For $60 each, we discovered a stunning part of New Zealand while running and biking across private land on Glenmore Station, located only 15 minutes from Tekapo township, plus a hearty meal to finish off the day. When it comes to adventure racing, you couldn’t ask for more. 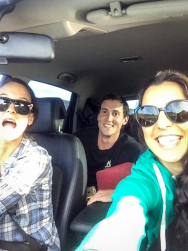 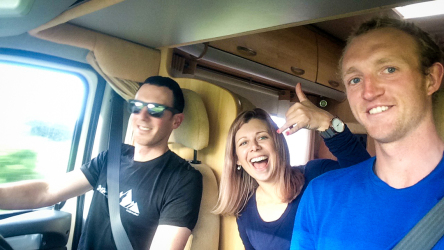 Arriving at Mum and Dad’s after work on Friday, Scott, Grant and I loaded up Ernie (campervan) and headed for the Mackenzie Country to meet up with the rest of the team members – Jacqs, Caeley and Nathan. Split into two teams, the girls made up ‘Say Yes to Adventure’ and the boys ‘Hot Tigers’ – that’s what you get when you put me in charge of entering. Needless to say, the boys weren’t too fond of their team name, my mature mind, however, thought it was spot on.

Registration at 6am the following morning meant we didn’t have to arrive by a particular time, taking the pressure off leaving work too early. Mum (the legend) had loaded the fridge up with a delicious lasagne for dinner, salad and some Tatty’s Chew (Scott’s request) to fill the baking tins. After the usual fluffing that goes with getting ourselves sorted for these events, we were all tucked up in our beds not long after 10pm. Scott drew the short straw (debatable) and was outside in his tent.

There’s no need to set the alarm when you’re in the company of Scott, who arrived dressed and ready to go at 5.45am, putting on the kettle and making us all a cup of tea as we slowly emerged from beneath the covers. With registration sorted we then picked up our maps at 6.30am and quickly sat down in our teams to come up with the most logical route. We had a time limit of 12 hours, and a set of markers to collect either on your bike or running. You couldn’t combine the two – those marked with a B had to be collected while on the bike section, and the same for the R markers on the run. There was, however, one marker with an X, which could be collected on what you considered to be the most logical section. 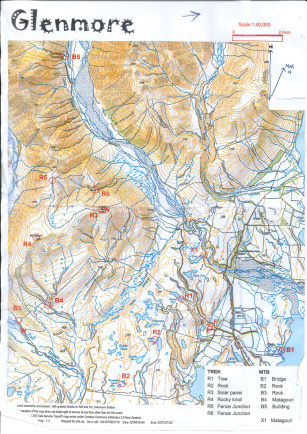 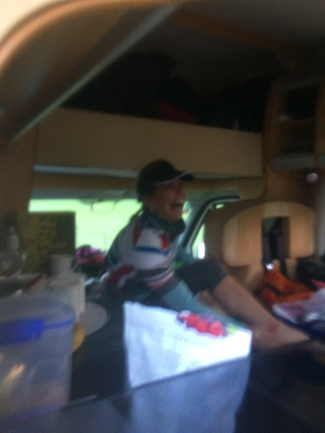 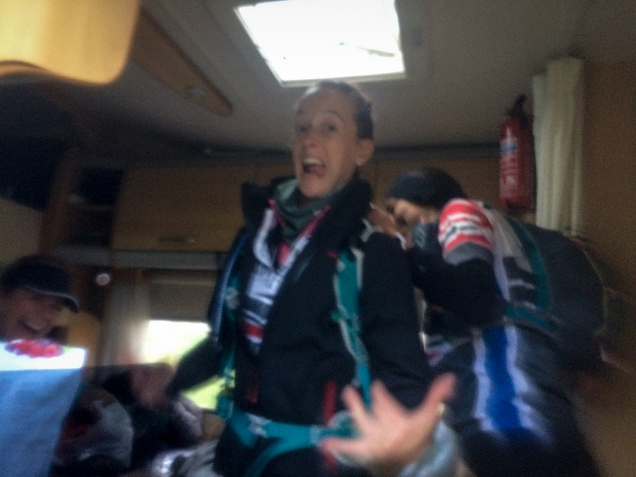 We knew our strength was running, definitely not biking, so we decided to do the run section first, collecting the X marker on this stage too. We didn’t need to use a compass (phew), but a sound knowledge of map reading certainly helped. Race briefing was at 7.45am with the starter hooter going off at 8am. Even with a 5.45am wake-up call, we weren’t quite ready in time; I had my sneakers off applying Gurney Goo to my feet (essential), and Caeley was plaiting Jacqs hair! Not an ideal start, but we quickly sorted our gear, packs were thrown on our backs and off we went, not before a quick return to collect the map!

We were only five minutes max behind the boys, who were headed for the same first marker as us, so a jog up the 4WD track meant we caught them just before the checkpoint. After this they headed for a different marker, while we set off for marker X. Rosie Shakespeare’s team had the same route plan to us, and for most of the day we ended up playing cat and mouse. They were a lot wiser than us, though; we would race off before realising that the shortest route does not always mean the fastest! At one stage, we were waist-deep in matagouri and Briar bushes, while they were walking up a clear ridge only 50-metres away. It was entertaining if nothing else.

Rain showers came and went throughout the morning, which meant our jackets were pulled on and off many times. As we gained height, the views became even more spectacular, made even more dramatic by the storm clouds rolling down the valley. From the very top (Mt Joseph, 1682 metres) we could see for miles; Lake Tekapo, Pukaki and Ohau filling our vistas. And if the clouds weren’t covering her, I imagine we would have seen Mt Cook too. After a long slog straight up and some more markers collected, it was time for the descent. Following a 4WD track meant we could run to the bottom, picking up valuable time. We had one last marker to collect, which we could see from the top, so it was a matter of navigating our way to it once we hit the flatter ground.

Thankfully we managed to find every marker almost immediately; If you were in the right place, they were easy to find, unlike some races where the markers can be well hidden. With all the run markers now collected, it was a matter of getting back to base camp for the second half of the day – the mountain bike. Coming over the final hill, we could see the woolshed, the campervan… and the boys!! We thought they would be long gone, so our gentle amble quickly turned into a sprint. We weren’t going to let them get away without seeing us. We needn’t have worried; they heard us coming before they saw us! I don’t think our joy at seeing them was reciprocated.

We had a quick chat, but they were off, leaving us to sort our gear, have some bacon and egg pie for lunch and get on bikes. Usually, markers in a Rogaine are point-loaded – meaning the harder ones to get to are worth more. This wasn’t the case this time, so we decided to collect the closest makers, and if we made a good time, we would then head to the last marker up the Cass River to Waterfall Hut, at least a 30-kilometre round trip up the valley.

There’s a reason why we chose to do the bike section last; Jacqs was on her mum’s bike, and Caeley was on my Dad’s! They had both been on their bikes only once before when we did a mission up to Lake Coleridge a few weeks ago. Both were hardtails (no rear suspension), and neither had clip-in shoes. I take my hat off to those two; they were absolute legends! It was rough ground, especially going around the face of the main hill section, with some long bumpy uphill that would have been a nightmare with no clip-ins. We had all fingers and toes crossed that Caeley didn’t get a flat tyre too, as she had no spares! It would be fair to say our admin could do with a bit more fine-tuning. There were some sweet downhill sections (for me anyway), but on one of the river crossings, I didn’t quite make it all the way across. Thankfully it was followed by a steep uphill with lots of pushing so getting cold wasn’t an option.

We knew we had to reach a certain point on the map by 5pm to give us enough time to arrive at the Waterfall Hut checkpoint. But the uphill slog took us longer than we had predicted, so we made the call that we were here to enjoy the day and not to be rescued by the event organisers. Once this decision was made it took the pressure off as we knew we would come in with plenty of time to spare. We were also getting very over our bikes, with Caeley declaring she was “never fu*ken mountain biking again,” after falling off in a massive patch of mud. Jacqs and I were full of support as we stood there laughing. Rosie’s Team had caught us again at this point, and we happily waved them off as they turned left to get the final checkpoint, while we headed in the opposite direction for home. With no more markers to collect, we were dreaming of comfy clothes and a beer in the sun while we waited for the boys to return.

Powering along the 4WD with only a couple of kilometres left, we passed another female team who were running. We presumed they had collected all the markers (their team name was GodZone), so we were in no hurry once we got back to hand our cards in. It turns out presumption is the mother of all fuckups, and we ended up winning by a mere three minutes over them, ending our day after ten hours and 50 minutes. Lucky I didn’t make the girls stop too often for photos (well worth it, though!).

The boys came in about 20 minutes after us with big smiles on their faces, having collected all of the markers. This was Nathan’s first ever foray in multisport – taking on a 12-hour race with two of the fastest people I know, you don’t make it easy for yourself! Who said you have a mid-life crisis when you hit 40!?!? As always, we debriefed the day, both highs and lows, all agreeing it was a fantastic event over some incredibly beautiful country.

After a hearty dinner and prize giving (unfortunately, they miscounted our markers, and we were called out in second place, typical!) it was back to the camper for a few wines, a bottle of port (well-earned) and an entertaining game of Cards of Humanity. It’s a good thing we are all so PC. Jacq’s we won’t forget the ten beers you still have to consume…

Thanks to Will and Em Murray, who let 70 people explore their property for the day. We still have marker B5 to collect from Waterfall Hut, so hopefully, we will be back one day! Thanks to Sharon and the crew from the South Canterbury Adventure Racing Club who put this event on every year, each time at a different location. You can almost guarantee it will snow, but if you are looking for a challenge, then I can’t recommend this race enough. 12 hours with good friends exploring New Zealand’s stunning great outdoors, it doesn’t get much better.

The Boys from Bondi Beach

Running with the Desert Gods